Learn about dengue, chickenpox and malaria

Reduce mosquito infestation, prevent waterlogging around the house and in the house, keep water in the cooler empty, spray insecticide, use mosquito agarbati and insecticide vaporizer 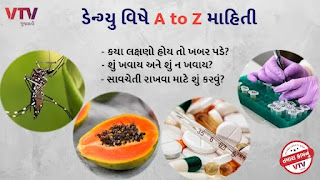 50 50% of the world’s population is at risk of contracting the disease.

Four types of dengue virus have been researched. These include DEN-1, DEN-2, DEN-3 and DEN-4, which give a lifelong immunity to a patient who has been infected with the virus.

According to another estimate, 5 lakh people in the world are hospitalized due to severe dengue. And 2.5 percent of these cases have been found to be fatal. Symptoms of viral fever appear in the body about 4 to 10 days after a mosquito bite.

Tests for the diagnosis of this disease are readily available in our country.

The best test for dengue virus Dengue virus PCR is also available there as it gives us a diagnosis on the first day. Which test is expensive.

• Blood cell count needs to be done repeatedly in the second routine test. In which the platelets i.e. platelet count continues to decrease, leukocytes decrease and hemoconcentration occurs and hemoglobin appears to increase. This is commonly seen in every patient.
Dengue Prevention

Reduce mosquito infestation, prevent waterlogging around the house and in the house, keep the water in the cooler empty, spray insecticide, use mosquito agarbati and insecticide vaporizer.

Dispose of waste well.
It is advisable to seek treatment as soon as the symptoms of dengue appear as per the doctor’s advice.

• Dengue Hemorrhagic fever Bleeding anywhere in the body – such as blood in the urine, blood in the toilet, snoring, vomiting – is found in this extreme type of dengue. Which can be fatal. This type of patient is admitted to the ICU.

Primarily in the treatment of this virus is to control the symptoms.

It is necessary to control fever, maintain body hydration, control vomiting / nausea and treat according to the symptoms.

No antivirus has been detected to kill the virus.
The vaccine to control the virus is being researched by the Dengvaxia Sanofi Laboratory and in African countries where dengue outbreaks are found in more than 70% of perennials. Come in use there.

Chikungunya is a viral disease. Which is mainly caused by the bite of a mosquito called Aedes.
The main symptoms of chickenpox are fever, joint pain and swelling, muscle aches, body aches.

Joint pain and swelling – mainly causes more discomfort to the patient and can last a long time even after the fever is gone.
There is no cure for this disease which can kill the virus. For general treatment only the most useful is considered. Medications for pain control, maintaining body hydration, and the type of symptoms and signs

The mosquitoes that spread the disease usually bite during the day. And the disease mainly occurs during the monsoon or in the following months.Disease occurs 4 to 8 days after mosquito bites.

સSerological tests for the diagnosis of this disease include IgM antibody and Chikungunya virus PCR test.

Highest Highest levels of Chikungunya IgM antibody are seen in 3 to 5 weeks. And may be present in the blood for about 2 months,There should be no flooding in and around the house to prevent this disease from occurring.

• Wear puri bayana, apply repellent cream on exposed parts of the body, use of mosquito net is beneficial. Mosquito incense sticks and insecticide vaporizers are also useful for mosquito control.

• Chikungunya disease has been rampant in our country since 2005. In order to control it, we have to be vigilant and keep the mosquito infestation under control so that this can be prevented.

• Malaria is a disease transmitted by female Anopheles mosquitoes / Plasmodium parasites inside the mosquito give birth to the disease.